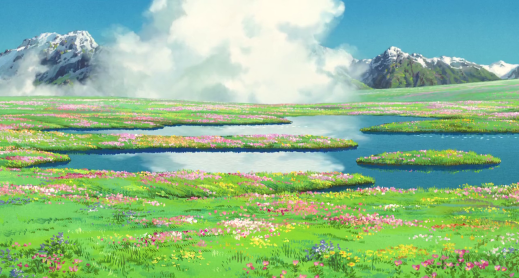 (To check out the previous essay in this Studio Ghibli essay series click Spirited Away. For the first title in the series click Lupin III)

Pacifism and war, magic and realism, feminism and ecology, Shinto and a romanticism of past ages and an imagined Europe. These are all themes one can find in most any Hayao Miyazaki film. There’s been no lack of scholarship on these concepts and themes in Miyazaki’s ninth feature film either. Here, I would like to continue the main thrust of my essays thus far and focus on an overlooked or underdeveloped point of view or question, and in my approach to this particular film I will be breaking from the role as commentator or exegete or explorer to be a little more brutal with the film and to take on the role of critic.

Miyazaki said of the film, “I wanted to convey the message that life is worth living and I don’t think that’s changed.” Too often critics evaluate films on the basis of their own criterion, but my idol and main influence in my approach as a critic is modeled on a different stream of thought derived from Roger Ebert. He pointed out years ago that one must evaluate a film based on its own criterion, that one mustn’t compare every B-movie to Citizen Kane for example, or else 1. you will be giving out bad reviews to nearly every film released and 2. you miss the point of what the director was trying to do. So the question for Howl’s Moving Castle, as a critic, becomes this: Does the film do what Miyazaki created it to do? Namely, does it evoke a life-affirming response in the viewer?

In Howl’s world, magic and science function interdependently. Both exist and can help to modify the other and advance society, but there are whole classes of rogue Wizards like Howl and evil Witches like The Witch of the Waste who reside in the Wastes as the dregs of society who constantly place curses on people. Howl operates under multiple pseudonyms throughout the kingdom and sells townsfolk medicines and charms to make money, but he is also for his infantilism and occasional rages. Townsfolk think of Howl as a dangerous drifter who moves from place to place seeking out beautiful women just to use them and leave, thereby breaking hearts, and in some people’s fictions, even consuming said hearts.

The Witch of the Waste, an ancient and morbidly obese witch who keeps herself looking relatively young through magical means, hunts down Howl and places curses on any girls he comes into contact with. She is the one who places the curse on Sophie in the film’s beginning that turns Sophie into a ninety year old woman: a curse she would of had to live with for the rest of her short life if she had not happened to find Howl’s Moving Castle.

In our own world there is no magic. People suffer and die and live and breathe and eat and defecate and things move forward unrelentingly without care for human pain. What Miyazaki’s film shows us is that even with magic and instantaneous cures, power dynamics and selfishness and egocentrism would still exist as part and parcel of the human condition. Neither world is better or worse and both are problematic. The absence of magic in our world and the fact that life would be hard for the average person in either world does nothing significant to get to Miyazaki’s point of reinforcing a yes-saying to life. If anything, it tells us that life cannot even theoretically be much better in a world totally alien to our own.

In Howl’s world, the drums of war beat just as a violently. The nation-states there fight wars for no obvious reasons beyond prejudice, unwarranted suspicion of one kingdom taking another’s Prince hostage (he was actually turned into a Scarecrow by a Witch), and just because they have the resources to do so. Even at the film’s end, when the war is dissolved, it only happens because the Prince is found and returned to human form by Sophie’s kiss, thereby breaking his enchantment. The war, which was mostly pointless in the first place is shown to be completely pointless. While it was raging, Wizards turned into beasts, never to return to human form, and all in the name of country, but for a purposeless war. The bombers destroy innocent lives and break down technological progress and harmony by attacking cities. The murderers lie on both sides with neither one occupying a just war position.

Miyazaki did not create this world in a vacuum. This world was supposed to be a direct parallel to the world today and an ideological and emotional gut-level attack on the purposeless imperialism and warmongering of the United State. The film was released in 2004 and Miyazaki meant it to be specifically against the Iraq War in which American troops and bombers killed over a million innocent civilians (including many women, children, and elderly persons) for no reason. There were no WMD’s and there were no good reasons to believe from reports by UN inspectors that there were any. No 9/11 terrorists were from Iraq. And after we deposed Saddam Hussein and allowed his people to kill him extra-judicially, we barred his Ba’ath party members from holding positions in the new government, and all the instability in the nation and outrage from his party officials created the core of more terrorist groups like ISIS we have had to fight for more than a decade, resulting in more civilian deaths. Pointless civilian deaths.

In both Howl’s world and our world, wars are very rarely fought for moral purposes. Neither a world of magic or a world of technology is less susceptible to war. People will suffer and die in our world and continue to do so and later, political leaders can end conflicts without too much trouble, because the conflicts are largely reasonless in the first place. Is life worth living in a world where, as Charles Bukowski used to say, “People are not good to each other.” Is it worth living when all people, even the most evil and hateful have, as Jean Renoir stated, “their reasons”? These are personal questions that don’t make sense outside of the context of each and every individual’s life and experience and state of mind. But the film doesn’t seem to sway me or anyone else I’ve met and discussed this topic with toward a life-affirming stance.

However, maybe Miyazaki meant for the film’s final scenes to restore hope in humanity and in our ability to change. Howl becomes less infantile and begins to care more about those around him as he gains back his heart after Sophie sets it free from the fire demon Calcifer’s curse. The Witch of the Waste unlearns her hatred for those who stand in her way and her one-pointed, self-centered focus on taking Howl’s heart wanes as she lives with Sophie and Howl in the Moving Castle. Suliman, the head magician and real puller of the levers of power in her Kingdom, decides to call off the war as she realizes its meaninglessness. But there are still other aimless Wizards with the power and will to manipulate weaker, normal human beings for their own purposes. There are still dark forces in the Wastes who prey on the weak and revel in disorder. The same politicians who started the pointless war still rule in their Kingdoms, absolutely, and they pass down their powers to their children and proteges who are reared or trained to become much like themselves.

In our world, wars still plague us. There are still leaders, maybe more now than any time since pre-World War II, who believe toughness and the will to war are great political and economic tools. They believe this even in a world where they may lose all economic and trading support from partner nations for their actions. And though international realities may curb war overall throughout the world in the coming years, automatic death technologies like drone strikes and future kill-bots seem to ensure that indiscriminate and pointless killings will continue. Add to this fears of a world of surveillance states where freedoms are gradually taken away to create a sense of false security, a “Security Theatre” if you will, and we have no great reason to believe the world will be drastically better in the coming years.

Miyazaki’s film provides very little hope for me that human beings will do the right thing when they continue to have many incentives not to do so. He wanted to convey the idea that life is worth living, but seems only to make me more depressed. He believes that life has been worth living for some time now (“I don’t think that that’s changed”), but existential dread and aporia and malaise are basically products of modernity that replace earlier pre-modern fears while leaving the fear and hopelessness of situations intact. And if the point is that it only takes one well-meaning, good person with a pure heart like Sophie to change the world for the better, than I’m still not very optimistic. Cause I’ve never met one.

[P.S. Life can be worth living even in the midst of all the world’s problems. But I can’t give you a reason, that’s your quest. And it may be the only quest you undertake in life. So go well and keep seeking.]