Nasu: A Migratory Bird with Suitcase 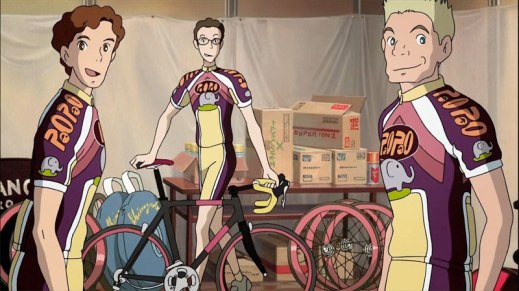 (Catch my review of the first Nasu film here: Summer in Andalusia)

Kitaro Kosaka, the long-time Studio Ghibli animator and animation director, created his first feature film as a full director in 2003 for Studio Madhouse. The film was an adaptation of a short story found within a three-volume manga entitled Nasu by the manga-ka Io Kuroda, recommended to Kosaka by Hayao Miyazaki, and about a professional cyclist named Pepe Benengeli who rides for the struggling Pao Pao Beer team. In that first film, he rides the Vuelta through his hometown in Andalusia and ultimately proves his merit to his team, his sponsors, and his friends and family by gaining a lead in the first half of the race and holding it till the end when he finishes first by the skin of his teeth.

From 2003 until his production began on his next OVA film in 2007, Kosaka worked sparsely providing character designs on the television series Monster for Studio Madhouse and working as animation director on Studio Ghibli’s 2004 film Howl’s Moving Castle. Information is hard to come by regarding the full animation cast on Kosaka’s second Nasu picture, but it seems that he did not retain the editorial talent of Takeshi Seyama and instead used a Madhouse employee to cut the film.

However, as a trade-off of sorts, Kosaka enlisted the aid of the famed animation director Ken’Ichi Yoshida to help him create his film. He and Yoshida had worked together on many an occasion for a Studio Ghibli throughout the 1990s when Yoshida was a Ghibli employee. Before becoming freelance in 1999, Yoshida contributed in-between animation on Only Yesterday, and key animation on Porco Rosso, Ocean Waves, Pom Poko, Whisper of the Heart, the Hayao Miyazaki directed music video On Your Mark, Princess Mononoke, and My Neighbors the Yamadas. After this period, he began work on numerous television series including highly esteemed modern classics like Neon Genesis Evangelion, Wolf’s Rain, and Eureka Seven. Needless to say, his help was indispensable and can be seen firsthand in the increase in production quality between the two films whilst keeping character designs and animation style (of the Lupin III mold) stable across time.

In Nasu: A Migratory Bird with Suitcase, a few years have elapsed since the last film. Pepe’s teammate Gilmore has since left Pao Pao Beer’s cycling team to join up with a different group in which the legendary rider Zanconi is employed. Pepe’s win at the Vuelta has since been forgotten, though his sponsorship is now relatively stable due to his constant decent performances coming in at second or third at races (and hence, racking up points in the process). But the team as a whole has suffered immensely and been unable to claim first in any race for some time, which has led Pao Pao Beer to consider disbanding the team the following year if they don’t shape up quickly.

Further, Pepe’s best remaining teammate Ciocci has been having something a third-life crisis and is questioning why he continues to race, to stay in shape, to diet, and to forego starting a family and gaining a lucrative career. His performance has begun to suffer because of his doubts and his doubts have been reinforced by his bad performance in what has become a vicious cycle leading nowhere but downhill if not stopped soon. Add to this, the complication of the great cyclist Marco Rondanini taking his own life toward the beginning of the film and becoming a legendary figure of sorts in the process of death and cultural glorification of his memory, and the immense enigma of Zanconi, and Ciocci begins to wonder whether he could even become a great cyclist in principle as all great cyclists have some je ne sais quoi that makes them almost gods among men. Ciocci worries that this is an attribute he does not possess and can never possess, and finds that it must be fueled by an almost religious drive to cycle as one’s Sisyphean end game.

All of this uncertainty in Ciocci, the second best rider on the team, and in the team’s continued existence, negatively effects all riders on the team. So, when they are flown to Japan for a big race against Gilmore and Zanconi’s team (amongst others), they seem totally demoralized. Luckily, Zanconi is no longer on a quest as a mere cyclist. He has taken up the Buddhist faith in a mystical vein, eats traditional Japanese foods when he arrives, speaks to no one (allowing himself to meditate through every waking moment and movement as the great Zen Buddhist Dogen might advise), and visits an ancient temple to the thousand armed Kannon: the Bodhisattva of Mercy derived from the Chinese Guanyin, herself derived from the male Indian Bodhisattva Avalokitesvara.

During the race, Zanconi stays with the pack and doesn’t make his move to leave it until the second the last lap of the race. He cycles at this point like his very life depends upon it and during that one lap manages to speed ahead not only of the pack, but of all of the those at the front of the race, more than a minute and a half ahead. He passes them all and crosses the finish line with dozens of yards of leeway between him and the second rider. And then, instead of carrying on his lead and continuing to win the race, he raises his arms to the sky as he passes the finish line in the second to last lap and seems to transform into a demigod of sorts int he process. He stops his bike and finishes the race, leaving only his teammate Gilmore to beat Pepe and Ciocci.

During the race, about the same time that Zanconi starts his drive forward to spiritual apotheosis, Pepe falls from his bike and loses his lead within a stream of rain pouring down the side of the mountain. He fights to regain the lead against impossible odds, and eventually gives Ciocci the backup to allow his partner to finish the race in first, which reestablishes Ciocci’s confidence, averts the team’s existential crisis, and gives everyone the motivation to fight harder in the future. Plus, Zanconi’s actions seem to be a goodbye of sorts to the sport of cycling, which means that with him gone and Marco Rondanini dead, there is an ego vacuum in the sport, which cries out to be filled by an enigmatic racer like Ciocci or Pepe Benengeli.

The film was a modest success in comparison to the previous Nasu film, which premiered in Un Certain Regard at Cannes Film Festival and won tons of awards from others. This Nasu won only the Best OVA award at the 2008 Tokyo Anime Awards. In the following years, Kosaka continued to work for both Studio Madhouse and Studio Ghibli including as a supervising animation director on Ponyo; as an animation director on the short film Mr. Dough and the Egg Princess, and the features From Up on Poppy Hill and The Wind Rises; as well as a key animator on Ghibli’s When Marnie Was There and Mamoru Hosada’s film The Boy and The Beast.

When I first discovered Kitaro Kosaka for myself, it was in preparation for a panel for an anime convention in which I introduced the guests to all of Studio Ghibli’s films not directed by Isao Takahata or Hayao Miyazaki: the founders of the studio. I continued by pointing out directors who could potentially carry on the Studio Ghibli aesthetic, Ghibli themes, or their attachment to traditional animation methods. Kosaka was one amongst this group that I mentioned, but since his last film as a director was, at that time, Nasu: A Migratory Bird with Suitcase, released ten years prior, and because he had only directed two OVAs and no feature-length animations, I had little real hopes that he would become a director in his own right. But now I am happy to report that he has completed a feature, entitled Okko’s Inn, and set to premiere this year (2018) at festivals worldwide alongside Mamoru Hosada’s new film Mirai of the Future. And if that double-bill, potentially the greatest since Miyazaki-Takahata released My Neighbor Totoro and Grave of the Fireflies together in 1988, isn’t something worth celebrating and getting excited about, then I don’t know what is!