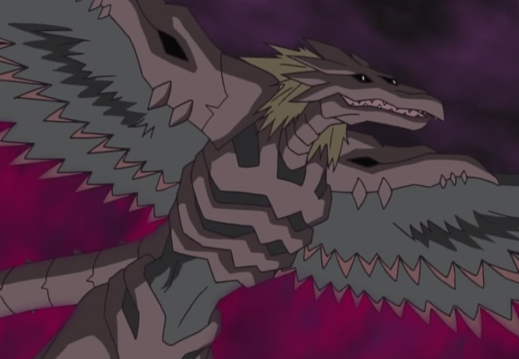 (Check out my previous review HERE. To go back to the beginning of this review series click HERE)

Again with the titles. We all know the reference of this one to a wildly popular Coen Production with all its attendant black humor and southern gothic references. And we know that Koji and Koichi share some relationship as near-identical persons, which means they are almost definitely brothers. So the name is a fun pun on the situation in the anime, but has little to do with the film it references thematically or narratively, and therefore, I’d have to certify this title rotten just like so many other lame puns I’ve commented on in this series in particular hitherto.

As BeoWolfmon continues to search for Duskmon in the shadows of the Dark Continent, his Digidestined friends track him down to help him defeat Duskmon if need be: a prospect that is highly likely now that both Koji and Takuya can Fusion Evolve. But Cherubimon is fed up with his minions being defeated so handily and he intervenes to prevent the Digidestined’s forward progress by caging them in a circle of black javelins with a large covering of darkness above. Patamon is an intuitive little Digimon luckily and uses his brains to suggest they dig their way out of the place when the rest find the black javelins impenetrable to all attacks. When they escape, Patamon- as the Rookie-level form of the Digimon protector Seraphimon- can sense the light emanating from Koji/BeoWolfmon and is able to get the crew back on track toward finding him.

The rest of the episode is pretty paint by numbers stuff that had previously already happened. Duskmon and BeoWolfmon duke it out. As the animation quality of Digimon has rarely been on the level of a Gainax or a Studio Trigger, the action sequences aren’t really fulfilling enough to warrant half an episode of jumping around and breaking stuff just to result in another draw, but that’s what they do anyway. They both see their human forms during the battle again and again they react in a confused manner to these images. They question each other in the hopes of getting to the bottom of the mystery between them, but instead of discussing the matter like two individuals who both stand to gain from a rational encounter, they continue to battle on and eventually one becomes the victor: BeoWolfmon.

Because Cherubimon is a god-like Digimon in terms of power, his apparition appears from out of the blue, out of the veritable machine to bestow upon Duskmon a new power. But first he alerts him to some of his past and allows Duskmon to realize that he is really a human boy named Koichi who searched after Koji and ended up in the Digital world because they are brothers. Koichi remembers his grandmother on her deathbed confessing to him that his father and brother are still alive and well (though we do not learn anything about why he was abandoned to live with her instead of with them). He sought out Koji and managed to find himself alone within the Digital World instead where his fear and self-loathing got the better of him.

There, darkness overwhelmed his spirit, which called toward Cherubimon like a magnet. Cherubimon offered to be his friend and to bestow upon him the power of the Legendary Warrior of Darkness, which would help him to survive in this hostile, new world. But the power came at a cost as Koichi became less and less human and forgot his identity and his past. He even forgot his main objective for coming to this world in the first place: to find his twin brother Koji. And now, after remembering all of this information and falling into a deeper state of depression, Cherubimon unlocks Koichi’s Beast Spirit of Darkness, which allows him to become Velgemon. From the vantage point of this stronger form, Koichi is able to overcome BeoWolfmon once again, though he is still emotionally grappling with his current knowledge and therefore, manages to fly off before the darkness consumes him totally and he destroys his brother Koji.

During this entire encounter, Koji knows only that whoever Koichi is, he looks awfully like himself. He seemingly has no knowledge of having a twin brother or a sibling whatsoever in the real world, and therefore probably thinks that Duskmon’s inner human image is something like a head game meant to throw Koji off while they battle. And that makes sense from his perspective as it would also be hard to believe that a human child who came to the Digital World from the real world would even be able to be corrupted by someone like Cherubimon. We know, because of Ken in Digimon Adventure 02, that human children can become corrupted when they enter the Digital World. However, Koji is a relative newcomer and the rules of the game might not be so apparent to him here.

Nevertheless, the battle is over for now as the Digidestined reunite and continue their long sojourn through the Dark Continent toward the ever elusive Rose Morning Star. 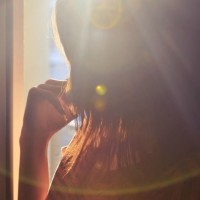